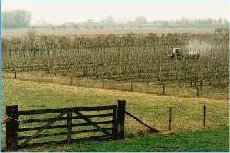 The European Union (EU) and its Member States are in the process of developing policies to prevent food, air, soil, groundwater and surface water from (further) contamination with pesticides and to diminish, as much as possible, adverse impact on the environment and public health. All countries of the EU have some kind of evaluation procedure for the registration of plant protection products (subsequently referred to as pesticides), however, the evaluation procedures differ considerably, both with respect to aspects evaluated, and the degree of explicitly of the procedure. The EU initialised the harmonisation of pesticide registration legislation. Part of this harmonisation process is the development of uniform procedures for the registration of pesticide in the EU (including the information required from industry to properly evaluate a pesticide, recommended guidelines for the conduct of experiments and unique (uniform) criteria for decision making). The Standing Committee for Plant Protection is responsible for the evaluation of pesticides on the European scale.

EUPHIDS has been developed as an open decision support tool, and quantitatively evaluates environmental and human health effects caused by the use of pesticides on different spatial scales. EUPHIDS is a flexible tool for designing thematic maps which identify and rank vulnerable regions with respect to groundwater contamination, environmental risk to terrestrial and aquatic organisms as well as health risks to agricultural workers and the general population.

EUPHIDS evaluates the distribution of a pesticide over different environmental compartments after its release according good agricultural practice. Environmental and human exposure are compared with toxicity data for humans, aquatic and terrestrial organisms. Possible short term (acute) and long term (chronic) effects are considered. The use of EUPHIDS for a given area can support the relative evaluation of pesticides, although automatic procedures for ranking of pesticides are not yet available.